The current state of E2EE in WebRTC

A current state of the things

But, as they say – the devil is in the details.

And in reality, most of our nowadays calls are not protected. And first of all, these are group calls, despite the fact that E2EE is here in WebRTC. This is the case, because end-to-end encryption in WebRTC is implemented only between 2 peers / points. Initially, the security system in WebRTC was developed for a point-to-point connection, a single hop, and not for multiple hops between peers.

But nowadays, most calls work through the so-called SFU bridge, which allows to make group calls for 10-20 users.

So, a SFU bridge is the same peer as any other user. All conference participants share media data with each other through this bridge and, accordingly, 2 “hops” are already needed here. The bridge, in turn, can legitimately decrypt the data of each user, because it, in fact, is the same user. And if it is compromised, then it can also send this data somewhere.

In general, not a good encryption in the end.

Many developers worried about this question several years ago, including Google developers.

And a new thing evolved  – WebRTC Insertable Streams, which allows you to make E2EE in WebRTC through any number of hops. In fact – now it works similarly to E2EE in messaging – you can decrypt media data only with a key, which is usually only available for call participants only.

And the ‘Explainer – WebRTC Insertable Streams’ itself:

Google is already successfully using it in production – so far so good.

And there is already an alpha implementation from the most popular SFU bridges:

In general, safe and protected calls are almost here!

One day we switched from HTTP to HTTPS.

Another day the same will happen with E2EE for messaging and calling. Be prepared for it! 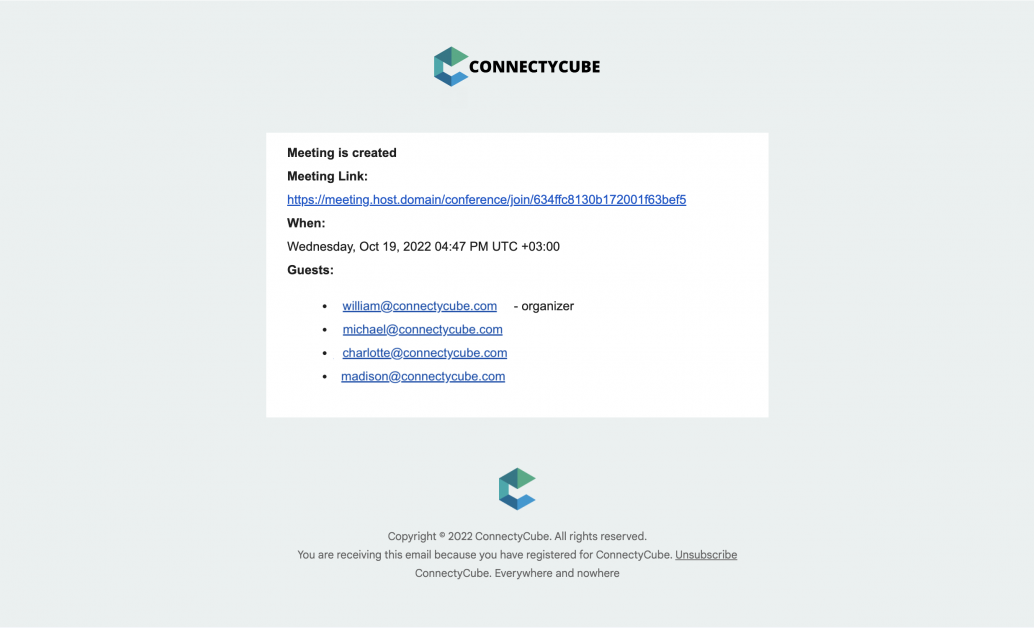 Good news we have all been waiting for. We’ve just launched a must have feature that’s helping you not to forget about the upcoming meetings – Email Reminders for Meetings. With the power of Email Notifications, the hosts can send read more…

Last month was particularly productive for our Flutter team. They were passionate about creating useful features to make your development easier. So meet the updated version of ConnectyCube Flutter SDK with many new helpful things! Thus, what’s new: Implemented WebRTC read more…

We are happy to inform you that we have added support of Apple JWT authentication token for push notifications. What is JWT? JSON Web Token (JWT) is an open standard (RFC 7519) that defines read more…

Flutter’s popularity among developers is growing rapidly and our team is also not standing still! We are glad to present to your attention several of our updates for Flutter at once. Completely reworked version of ConnectyCube Flutter Call Kit. Updated read more…

We are starting the new year with two great news at once for everyone who uses Flutter for app development. We have released: 1 – ConnectyCube Flutter SDK v2.0.8 with Screen Sharing support 2 – P2P read more…

We are in a hurry to share great news with you! Our ConnectyCube team is always happy to help you with the development and therefore released two new code samples at once: Angular Conference Call Code Sample React Conference Call read more…

We are in a hurry to inform you of long-awaited news that will facilitate and simplify your development for Flutter and allow you to develop mobile and web applications with messaging & calling capabilities from the same codebase. So meet read more…